Seals play an important role in hydraulic cylinders—they contain the fluid and prevent the leakage of fluid between components. They fall into two main categories: dynamic and static. Dynamic seals are used in between parts that are in relative motion. The seals for a rod sealing system protect the dynamic reciprocating motion for the piston rod and head. The dynamic reciprocating motion between the piston and cylinder bore is another area of a hydraulic cylinder that uses dynamic seals.

This cross-section of a hydraulic cylinder highlights the crucial seals needed for its operation.

The following is a list of dynamic seals and the special function each has in relation to cylinder performance: 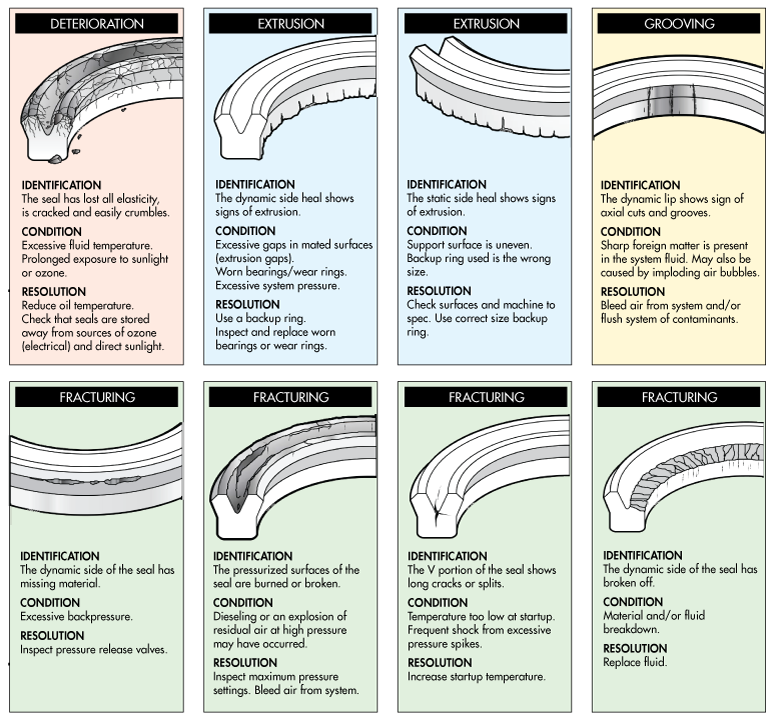 Shown above and below are common examples of seal failures, and solutions on how to fix them. Seal failures can be caused by excessive heat, improper installation, contamination, and excessive pressure spikes, among other reasons. 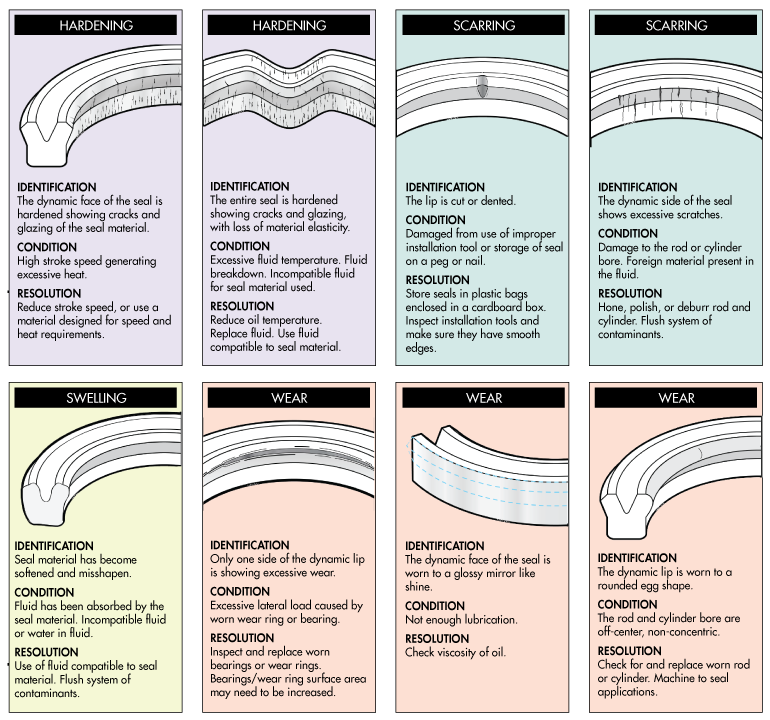 Due to time of use or exposure to abuse, hydraulic seals will eventually fail and need to be replaced. A design engineer may be able to reduce the damage inflicted on hydraulic seals if they keep in mind what typically causes failures, and try to prevent their damaging impact.

Hydraulic seals become hard when exposed to high temperatures. This is caused by either high fluid operating temperatures in the application or high-speed heat generation from stroking operations. When seals harden, they crack and lose elasticity, leading to seal failure.

Whether due to insufficient lubrication or excessive lateral load, wear on the dynamic face of a seal lip can cause considerable damage.

Installation tools and processes are important to the operating life of seals. Improper installation can cause cuts or dents in the dynamic lip of the seal, which affects hydraulic seal efficiency as well as introduces foreign elements into the hydraulic fluid.

Fracturing is the condition resulting in burns, breaking, long cracks, and a complete breaking off of the dynamic side of seal. This is due to excessive backpressure, high-pressure shocks/spikes, or use of low-grade materials during the manufacturing process of the seal.

As mentioned before, improper installation can create problems with hydraulic seals. It may result in uncleanliness, unsafe handling, contamination, and incorrect sizing of the chosen seal. Deciding the seal prior to build is important to make certain that the design is done correctly to ensure proper sealing.


Introduction of external flotsam and jetsam into the hydraulic rod causes contamination. When particles such as dirt, mud, powder, or other tiny elements attach themselves to the piston, they dirty the seal. The dirtier the seal, the more it loses its ability to hermetically prevent contaminants from the piston area.

Seal material will break down when it encounters a corrosive fluid. This will occur when the improper seal material is chosen for an application. The use of non-compatible materials leads to chemical attack by oil additives, hydrolysis, and/or oxidation reduction of seal elements. This will result in the loss of seal lip interface, softening of the seal durometer, swelling, and/or shrinkage of the seal. Discoloration of the seal is an indicator of chemical erosion.

There are specific design considerations when selecting seals. The right seal for the required application will depend on the application parameters and the information collected from the operating conditions of the hydraulic cylinders. Prior to selecting any seals, one should investigate the following considerations:

On the way of applying API Q1 certification